In general, frameworks can be used as brainstorming tools to generate new ideas for responding to industry competition. If you have a model for thinking about competition, it’s easier to understand what’s happening and to think creatively about possible solutions. One of the most popular frameworks for examining a firm’s competitive environment is Porter’s five forces, also known as the Industry and Competitive Analysis. As Porter puts it, “analyzing [these] forces illuminates an industry’s fundamental attractiveness, exposes the underlying drivers of average industry profitability, and provides insight into how profitability will evolve in the future.” The five forces this framework considers are (1) the intensity of rivalry among existing competitors, (2) the threat of new entrants, (3) the threat of substitute goods or services, (4) the bargaining power of buyers, and (5) the bargaining power of suppliers (see Figure 1.2.a below).

Figure 1.2.a The Five Forces of Industry and Competitive Analysis 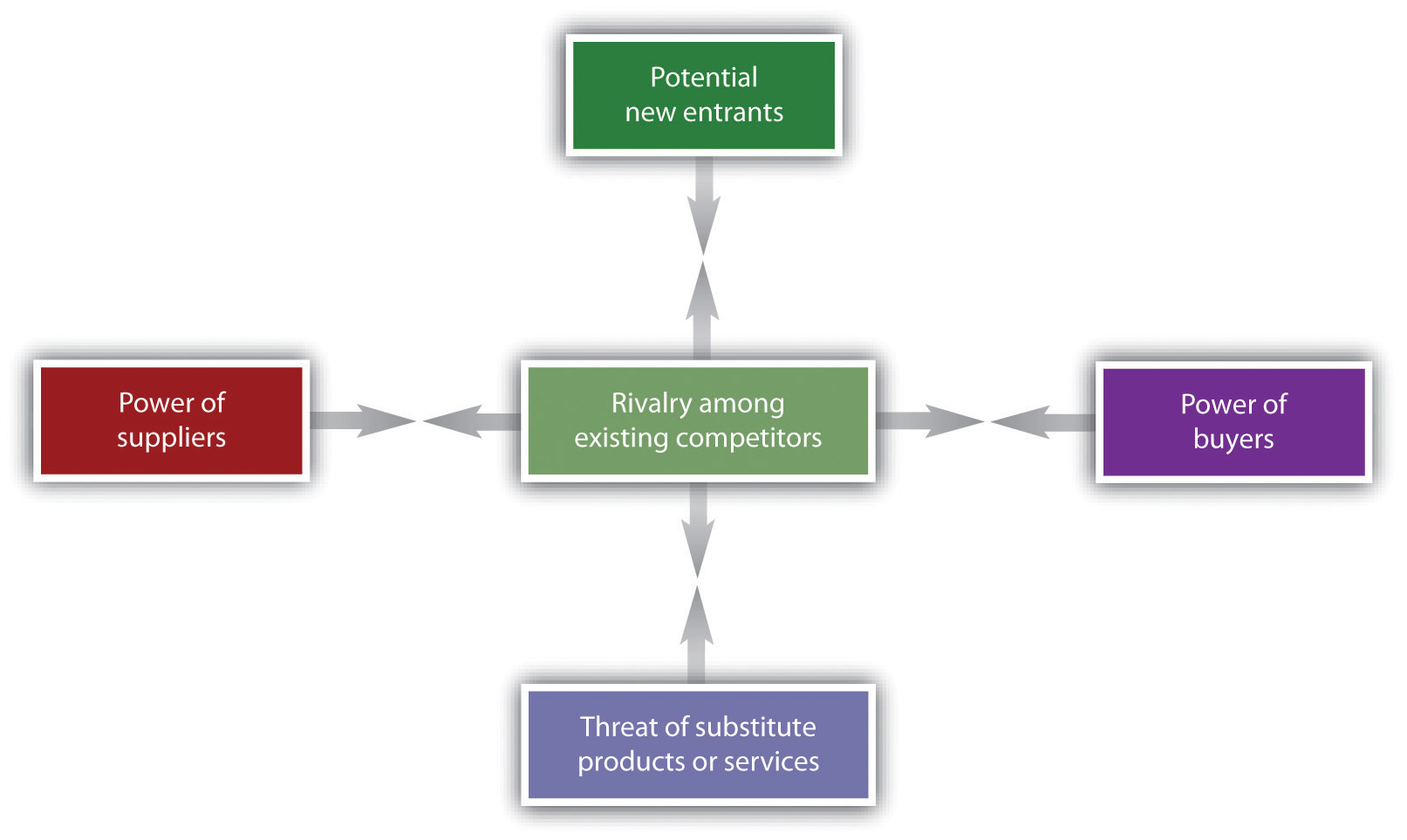 New technologies can create jarring shocks in an industry. Consider how the rise of the Internet has impacted the five forces for music retailers. As the Internet evolved, traditional music retailers like Tower and Virgin found that customers were seeking music online. These firms scrambled to invest in the new channel out of what is perceived to be a necessity. Their intensity of rivalry increases because they not only compete based on the geography of where brick-and-mortar stores are physically located, they now compete online as well. Investments online are expensive and uncertain, prompting some firms to partner with (then) new entrants such as Amazon.

Free from brick-and-mortar stores, Amazon, the dominant entrant in a wide range of fields, has a highly scalable cost structure. In many ways the online buying experience is superior to what customers would see in stores with the added benefit of hearing samples of almost all tracks, from a seemingly limitless selection. Just as LPs and tapes, CD sales have seen their prime now decades ago. The process of buying a plastic disc has faced substitutes when digital music files became available on commercial music sites. Who needs a physical CD when you can buy just the one song you like? Does your car still have a CD player or just a plug for your phone? Why not just subscribe to a limitless library instead?

The tech market changes meant that with the birth of the iPod, then the evolution of smartphones with built-in media players our listening habits changed, too. The convenience of carrying or streaming thousands of songs outweighs what most of us consider just a slight quality degradation. For the longest, iTunes was responsible for selling more music than any other firm, online or off. With so many subscription services around, including their own Apple Music, “Apple will shut down iTunes, ending the download era.  On Friday afternoon, social media erupted after Bloomberg News reported that Apple was set to announce the end of its iTunes store, which transformed the music business when it was launched in 2003.” (LA Times, 2019)

“Fueled by tremendous creative output by groundbreaking artists and now more than 50 million paid subscriptions, the U.S. music industry experienced its third year of consecutive growth in 2018 with retail revenues up 12% to $9.8 billion. Streaming now comprises 75% of total industry revenues.  Vinyl continues to be a bright spot for the physical market, up 8% to $419 million, the highest revenue level since 1988. ” (Source: riaa.com/u-s-sales-database/ and riaa.com/reports/2018-riaa-shipment-revenue-statistics-riaa/)
Observe the stacked column charts illustrating trends in music sales by format over the years between 1973 to 2018. 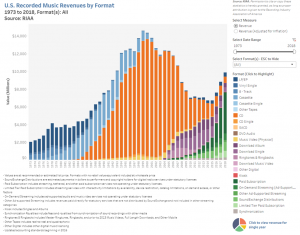 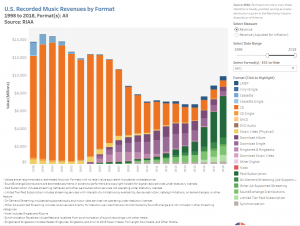 How has technology impacted the formats used the most?
How has the Internet impacted the means of accessing content over the past two decades?
How do consumers decide which product or service to pick?

All the changes in technology and in business models give consumers (buyers) choice so that they have bargaining power. They can demand cheaper prices and greater convenience. The bargaining power of suppliers—the music labels and artists—also increases. At the start of the Internet revolution, retailers could pressure labels to limit sales through competing channels. Now, with many of the major music retail chains in bankruptcy, labels have a freer hand to experiment, while bands large and small have new ways to reach fans, sometimes in ways that entirely bypass the traditional music labels.

While it can be useful to look at changes in one industry as a model for potential change in another, it’s important to realize that the changes that impact one industry do not necessarily impact other industries in the same way. For example, it is often suggested that the Internet increases bargaining power of buyers and lowers the bargaining power of suppliers. This suggestion is true for some industries like auto sales and jewelry where the products are commodities and the price transparency of the Internet counteracts a previous information asymmetry where customers often didn’t know enough information about a product to bargain effectively. But it’s not true across the board.

In cases where network effects are strong or a seller’s goods are highly differentiated, the Internet can strengthen supplier bargaining power. The customer base of an antique dealer used to be limited by how many likely purchasers lived within driving distance of a store. Now with eBay, ETSY, or Shopify the dealer can take a rare good to a global audience and have a much larger customer base. Switching costs also weaken buyer bargaining power. Wells Fargo has found that customers who use online bill pay (where switching costs are high) are 70 percent less likely to leave the bank than those who don’t, suggesting that these switching costs help cement customers to the company even when rivals offer more compelling rates or services.

Tech plays a significant role in shaping and reshaping Porter’s five forces, but it’s not the only significant force that can create an industry shock. Government deregulation or intervention, political shock, and social and demographic changes can all play a role in altering the competitive landscape. Because we live in an age of constant and relentless change, managers need to continually visit strategic frameworks to consider any market-impacting shifts. Predicting the future is difficult, but ignoring change can be catastrophic.

Key Framework: The Five Forces of Industry Competitive Advantage by University of Minnesota is licensed under a Creative Commons Attribution-NonCommercial-ShareAlike 4.0 International License, except where otherwise noted.

Foundations of Management Information Systems by Emese Felvegi; OpenStax; University of Minnesota Libraries; and Saylor Academy is licensed under a Creative Commons Attribution-NonCommercial-ShareAlike 4.0 International License, except where otherwise noted.