An important application of Thermodynamics and, arguably, the one that had motivated its systematic development in the first place, is Heat Engines. By construction, a heat engine consists of a working body, such as a gas or a mixture of vapor and liquid, that undergoes a cyclic process. During each cycle, heat that had been produced by some means is imparted to the working body. (The heat can be produced by burning a fuel, or a nuclear reaction, or by absorbing sunlight, etc.) Some of this heat is converted into useful work and some heat goes back in the environment. The temperature and entropy both vary during the cycle. We can graphically depict this state of affairs using the following graph: 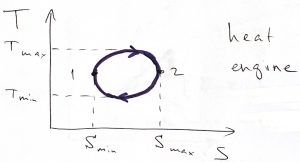 We have chosen the direction in the above process quite deliberately: The high-temperature,

leg of the process corresponds to inputting heat, while during the low temperature,

leg, heat is extracted from the system. Under these circumstances, the net heat put into the system is positive:

Indeed, the cyclic integral above can be presented as the sum of the integral along the

where we note that in the 1st integral in the r.h.s.,

since for each value of entropy, 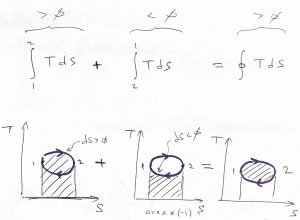 The fact of the total heat input being positive is key. To see this, integrate the differential form of energy conservation

and note that the cyclic integral of the energy is equal to zero because, on the one hand, the integral of

for the process and, on the other hand, the energy is a state function. The value of a state function is fully determined by the values of the control variables irrespective of the preparation protocol of the system. Since the initial and final states for cyclic processes are identical,

and so we obtain that the work done by system is exactly equal to the total amount of heat absorbed by the working body:

This equation can be regarded as a form of energy conservation law and implies that one cannot extract useful work out of nothing. Hypothetical engines that could do the latter, are called engines of the 1st kind. Clearly, such engines are physically impossible. Whenever there is an impression that work is created out of nothing, there a source of energy unaccounted for.

to denote small amounts of heat and work exchange, not the symbol “d”. This is to emphasize that heat and work are not state functions and how much heat or work has been exchanged with the systems actually depends on the specifics of the process, not just the initial and final states of the process. Here, specifically, we observe that neither

individually corresponds to an increment of a function, but their difference,

The negative work by the system means somebody else performs positive work on the system. At the same time, the negative

Thus the very same machine can be used both as an engine or a refrigerator depending on the directionality of the process. In practice, the engines work on much faster times scales than refrigerators and so one ordinarily employs distinct physical processes for the respective machines. Heat engines usually operate using hot gases. Although not particularly caloric in nature, expansion and compression of a gas can be done on rapid time scales thus allowing one to produce large amounts of power. For refrigerators, the power by itself is not of great priority. Instead, here one usually employs mechanical agitation or expansion to evaporate a liquid, which is in contact with the object or place that needs to be cooled. Evaporation extracts heat from that place. The vapor is then transported to elsewhere, where it condenses and gives off some of that heat. The liquid is then mechanically brought back in contact with the refrigerated object and so on. The power required to induce the evaporation is not particularly large, but the amount of heat involved in evaporation/condensation is substantial enough so that relatively small heat exchange units suffice to cool your home during hot Summer days.

Now, the efficiency of the heat engine is judged by which fraction of the heat imparted to the engine converted to useful work. Indeed, as far as the engine is concerned, the heat given off by the working body is not used to perform work by the engine itself. (This heat can be, in principle, collected and utilized.) Thus we define efficiency as

which, by virtue of Eq. 9, becomes

This can be expressed more vividly as the ratio of the following two areas:

, the efficiency is generally less than one but can be improved by lowering the temperature of the heat sink, i.e., the temperature at which the working body gives off heat, so at to make the quantity

smaller in magnitude. It turns out that there is an intrinsic upper bound on the efficiency of a heat engine, as elucidated by the French engineer Sadi Carnot some 200 years ago. To establish this bound, we first state an upper bound on the heat that can be passed on to the system at temperature

during an elemental process, known as the Clausius inequality:

is the eventual, equilibrium entropy change resulting from the process. The equality refers to the case when the system was, in fact, in equilibrium with the environment throughout the process, while the inequality covers situations where the process is faster than the relaxation time of the system.

The Clausius inequality comes about in the following way: Imagine the body has just received some heat in a process that is not necessarily quasi-static, in which case the body is not fully equilibrated. We can mentally subdivide the body into smaller parts, each of which still contains many molecules, but are small enough that it can be regarded as equilibrated. Thus the total amount of heat passed on to the system can be broken up into components

, for each of which we can use the equilibrium expression

and, thus, so are

. In this case, the sum of the increments is maximized when the final value of

is the total entropy the body, which achieves its maximum value in equilibrium:

case can be treated similarly and gives the same result, as we graphically illustrate below: 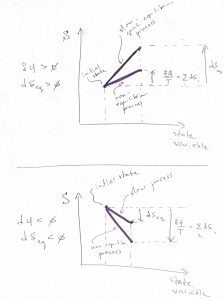 and integrating along a cyclic process, one obtains the integral form of the Clausius inequality:

We can use Eq. 15 to place certain bounds on the heat exchange with the system along the high temperature and low temperature legs of the cyclic process:

is negative on this leg of the process and

Where we used the Clausius inequality in the last step. In turn, this implies

To summarize, the quantity on the r.h.s. represents a fundamental upper bound on the efficiency of a (one-stage) heat engine. Note other sources of loss are present, such as friction between moving parts or incomplete burning of the fuel. This fundamental upper bound is intrinsically less than one, since the absolute zero of temperature,

, is not achievable. A hypothetical engine that would convert all of the heat into useful work is called the heat engine of the 2nd kind. Carnot’s result, then, demonstrates that the engine (or “perpetual motion”) of the 2nd kind is impossible. This notion is yet another equivalent formulation of the 2nd Law of Thermodynamics.

The natural question is, then: Aside from those additional losses, is there a process where the maximum possible value of

, is in fact achieved? Upon inspection of Eqs. 16 and 17 we readily conclude that the equality in those two equations are achieved when

throughout the high temperature leg, and

throughout the low temperature leg. This is achieved only in the following cycle, which is called the “Carnot cycle”:

That is, the temperature should actually stay constant during heating exchange. It is instructive to re-plot this cycle in the pressure-volume plane, to see where the working body expands and where it contracts. In the

plane, the cycle looks more complicated because the straight lines connecting the corners of the rectangle in the

plane become curved lines in the

becomes curves along each of which the quantity

remains constant. This is made apparent by setting

in the expression for the entropy we had obtained earlier:

and using the ideal gas law

, the isentrope always have a steeper slope than the isotherm, because

. Thus we arrive at the following picture for the Carnot cycle in the 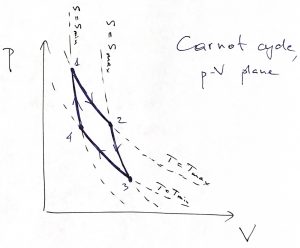 leg, where is expands isothermally and absorbs heat, and on the

leg, where it expands isentropically, i.e., without heat exchange with the environment, and, thus cools. On the

leg, the system contracts and gives off heat while staying at the temperature of the heat sink, while in the final,

leg, the system keeps contracting without heat exchange and, thus, warms back up to the temperature of the heat source.

Actual engines do not operate via the Carnot cycle for practical reasons, for which reason they are less efficient than what is prescribed by Carnot’s upper bound. (This is in addition to a variety of aforementioned mechanical and chemical losses.) Examples of those other types of engines are given below for your reference:

We note that since the electronic energies, which are of order eV, are much higher than the thermal energy scale, electrical engines operate much more efficiently than heat engines. Thus, in principle, if one can convert sunlight into electricity with relatively little heat dissipation, we can make convert energy into work in a drastically more efficient way. We know that absorption of light by molecules is accompanied by some vibrational relaxation, which leads to dissipation of energy. In any event, the best man-made photovoltaic devices can operate at 40% efficiency. Perhaps, plants can do it better.

Finally, we mention that these ideas can be applied to types of work other than mechanical work. Imagine, for instance, recurrent shuttling of ions across the membrane of a living cell or a mitochondrium: 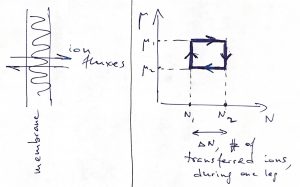 Here, one may consider a cyclic process where the temperature is kept constant, and so the appropriate thermodynamic potential is the Helmholtz free energy:

). Hereby one can extract mechanical work

, if the ions diffuse back and forth in a cyclic fashion while the two sides of the membrane are maintained at different values of the chemical potential. Conversely, one may induce ion transfer by mechanically moving the interface.