Next we determine the thermodynamic potential that controls the equilibration of the volume, in addition to controlling the equilibrium value of the energy. In many, of not most cases of interest, the volume of the system cannot be rigidly controlled. Instead, we can only be sure of the value of the pressure. For instance, most liquids do not fill their container fully, and so even if the container is completely rigid (which is an idealization) and fully sealed, the liquid will occupy only a portion of the container, the rest occupied by its vapor or the corresponding crystal. In an open container, clearly one can only control the pressure.

Perhaps the easiest way to determine the pertinent thermodynamic potential is to first write down the energy conservation law in a form that brings out the energy and volume dependence of the entropy:

We are mindful that the above equation pertains to the equilibrium values of all the quantities. Thus in equilibrium,

Note we have explicitly indicated that the particle number

is being kept constant, which will be of use later one.

Recall that Eq. 3 resulted from minimizing the function

.  It is not hard to see that Eq. 3 results just as well from minimization with respect to

of the following function

At the same time, we can readily convince ourselves that minimizing this function with respect to

also yields Eq. 4! To be clear, the parameters

are kept constant during the minimization as well. The function

, there are two ways to interpret Eq. 2: On the one hand, they tell us the values of temperature and pressure that are needed to achieve specific equilibrium values for the energy and volume. On the other hand, given specific values of externally imposed temperature and pressure, the equilibrium energy and volume correspond to the minimum of the function

, where Eq. 2 expresses the formal condition for the location of the minimum on  the

surface. As an example, we show the

surface for the ideal gas: 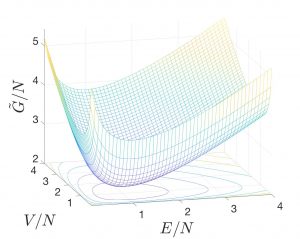 where we used the expression

obtained by taking the

dependence derived in the last Chapter:

. Note we must use the entropy as a function of energy, volume, and particle number

and note that the precise choice of

affects only the vertical, but not the lateral position of the graph. Thus, the positions of the minima are not affected. Lastly, it is convenient to graph thing so that all of the extensive properties, if any, are given per particle.

In the situation where

stand for externally imposed temperature and pressure and we are considering fluctuations of energy and volume, it is easy to see that such fluctuations will be subject to a restoring force if the curvature of the

surface is positive throughout. We have already discussed the stability with respect to energy fluctuations in the preceding Chapter and postpone further discussion of the necessary criteria until the next Chapter.

potential, we now define the Gibbs free energy as the minimum of the

where it is understood that every quantity is at its equilibrium value and, as such, is a function of exactly three independent quantities. A natural—but not unique!—choice of the variables is

We are now ready to formulate yet another version of the 2nd Law of Thermodynamics, i.e, that at constant pressure and temperature, a large system will spontaneously and irreversibly relax so as to minimize its Gibbs free energy. Once equilibrated, the system will remain in equilibrium indefinitely. This form of the 2nd Law is particularly useful because

As a simple yet useful illustration of the utility of the

and are maintained at the same temperature and pressure. 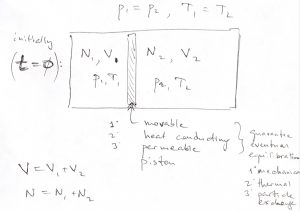 Thus, according to the ideal gas law, the particle numbers must be proportional to the respective volumes:

Thus the mole fractions of the two gases are, respectively

Clearly, both the thermal and mechanical equilibrium are in place, but the system is not in full equilibrium: Since the concentrations of each gas differ on the opposite sides of the partition, there will be uncompensated fluxes of both kinds of particles until the mixture will have the same composition in both parts of the container. No quantity in Eq. 9 will change as a result of the particle exchange except for one: the entropy. As a result of the mixing, the volume of gas 1 will increase from

and the volume of gas 2 will increase from

. The resulting entropy change is, then,

and the total particle number

One can likewise derive that for an arbitrary mixture of ideal gases,

a celebrated formula, due to Gibbs.

One can easily convince oneself that the mixing entropy is always positive, which we will do here graphically for the binary mixture from Eq. 14 while remembering that

. The mixing entropy vanishes only for pure substances,

, of course and is maxed out at

per particle for an equal mixture 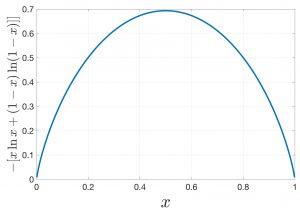 The corresponding Gibbs free energy change is, then, always negative:

To appreciate just how unlikely de-mixing would be, we compare the probability of the mixed vs. de-mixed state. As in the preceding Chapter, the ratio of the numbers of accessible states is given by the exponential of the free energy times

, the pertinent free energy being is that due to Gibbs, because we are keeping fixed temperature and pressure:

, a grotesquely large number. To put this in perspective, I quote here the well known French mathematician Borel (by way of G.N.Lewis’s book “The anatomy of Science”): “Imagine a million monkeys allowed to play upon the keys of a million typewriters. What is the chance that this wanton activity should reproduce exactly all of the volumes which are contained in the library of the British Museum? It certainly is not a large chance, but it may be roughly calculated, and proves in fact to be considerably larger than the chance that a mixture of oxygen and nitrogen will separate into the two pure constitutents.”

Now, the aforementioned choice of the quantities

as the arguments of

, but also because of the fact that the partial derivative of

w.r.t. these variables are particularly simple. To discuss this point in a more general way, let us revisit energy conservation while including the possibility that the particle number is allowed to change. For this, let us define a new quantity, called the chemical potential. The chemical potential is the energy cost of adding a particle to the system while no heat exchange takes place and no mechanical work is done:

, this can be re-written as the following derivative:

We can now write the energy conservation for systems with a variable particle number:

Note that at this point, we are still considering pure systems, i.e., those containing just one chemical species. Mixtures will be considered in due time.

Thus for the increment of the Gibbs free energy we obtain

Likewise, the increment of the Helmholtz energy,

, for a system with a variable particle number becomes

And, finally we introduce a new function, called the enthalpy, or the heat function:

The increments of all four energy functions given above display a clear pattern: They all have simple-looking derivatives for certain choices of independent parameters, as summarized in the Table below:

Other choices of variables are possible so long as

The converse of the item 2 is worth elaborating on: If expressed per particle, each of the four energies no longer depends on

and, thus, is a function of exactly two variables. Both of these remaining variables cannot contain information about the system size and, thus, must be intensive. Now let us take every item in the 1st column of the table above and re-write it per particle. In those cases where one or both of the arguments are extensive variables, we must replace them with their intensive counterparts per particle:

One immediately notices that of the four energies, the Gibbs energy has the simplest

comparing this result with the bottom equation from Eq. 23, one immediately obtains

. In view of Eq. 30 this lead to the remarkable result that the chemical potential is, in fact, the Gibbs free energy per particle!

It is also clear from the above discussion that only two intensive variables are independent, while any other intensive property can be expressed as their function. A useful instance of such a functional relation can be obtained by noticing that

from Eq. 22. This yields what is known as the Gibbs-Duhem equation:

It becomes particularly lucid when written our in terms of quantities per particle, which is accomplished by dividing it by the particle number:

is the specific entropy and

specific volume. Every quantity in the above equation is intensive. Thus we obtain

Why do we call enthalpy the “heat function”? Because it directly reflects the amount of exchanged heat during an isobaric process. (“Isobaric” means “at constant pressure”.) Indeed, per Eq. 27,

If, in addition, the temperature is kept constant as well, one can easily integrate this to obtain

(Clearly, the system must change its volume during such a process!)

Another consequence of Eq. 35 is a useful expression for the heat capacity at constant pressure:

This indicates that the enthalpy is essentially the constant-pressure analog of the energy.

Finally, one may also write down simple relations between the thermodynamic functions, such as

As an illustration of the utility of these and earlier expressions, let us determine the expression for the chemical potential of a single-component ideal gas. First re-write Eq. 19 as

To use this formula, we must express the entropy as a function of the three variables

exclusively. (This means that any other quantity that could be involved in the available expression must be expressed through those three variables.) Just such an expression is available in Eq. 6. Differentiating it w.r.t.

Here we use that

, one obtains a compact expression:

which, again, emphasizes the role of

as the basic thermal energy scale for a particle, but modified to account for specific conditions. The above expression can be re-written for other combinations of parameters, using the equation of state. It can be also used to write down expressions for the thermodynamic functions. And so, for instance, for a process conserving the particle number, one gets

The corresponding Helmholtz free energy is, by virtue of Eq. 38: