Part A
For this exercise, your instructor will provide you with a set of sedimentary structures. Look at the samples closely and use a hand lens if necessary. Create a sketch of each sedimentary structure in the blank space below, focusing on what you think are the most important characteristics of the sample. Then, in full sentences, describe the structure you just sketched. If it helps, pretend you are describing what the structure looks like to someone who can not see it.

Part B
Now put your observational and descriptive skills to the test. Read your descriptions to your classmates and see if they can identify which samples you are talking about.

The simplest sedimentary structure is stratification, or layering that can be observed in sedimentary rocks (Figure 4.1). Layers of sediment that are thicker than 1 cm are called and layers thinner than 1 cm are called . Laminations are typically composed of fine-grained silt and clay-sized sediment. Structures can be more complex like the wavy pattern seen in ripple marks (Figure 4.2) or chaotic looking patterns in cross-bedding (Figure 4.3).

Each structure tells a story that geologists use to interpret Earth’s history, and there are a number of sedimentary structures in geology. For this chapter, only a few of them are discussed: ripple marks, cross-bedding, graded bedding, mudcracks, raindrop imprints, sole marks, and trace fossils and bioturbation.

As water or wind moves across loose, unconsolidated sediment it can shape the grains into wavy patterns called dunes (>10 cm) and ripples (<10 cm). , like those seen in Figures 4.2 and 4.4, are formed by the back-and-forth flow of water over sediment. These types of ripples are formed in the shallow marine environment where the back-and-forth motion of waves, or even tides, shape the sediment at the bottom of the ocean. These ripples have symmetrical limbs, meaning that both sides of the ripple dip at about the same angle. This video on symmetrical ripples can help you see how this process works. Symmetrical ripple marks are most commonly found in sandstones from shallow marine environments.

Water moving in one direction, like a river, can produce asymmetrical ripple marks. The limbs on these ripples are not equal, with one side that is more shallow and one side that is steeper. These types of ripple marks can tell you which direction the river was flowing because sediment moves up the shallow side of the ripple and gets deposited on the steep side (Figures 4.5 and 4.6). The deposition on the steep side of the ripple allows the ripple to move in the direction water is flowing, as shown in this video. Wind can also create asymmetrical ripple marks at different scales. Ripple marks at smaller scales can usually be found along a beach. Large-scale ripple marks are called dunes, and are common in deserts and some coastal environments. 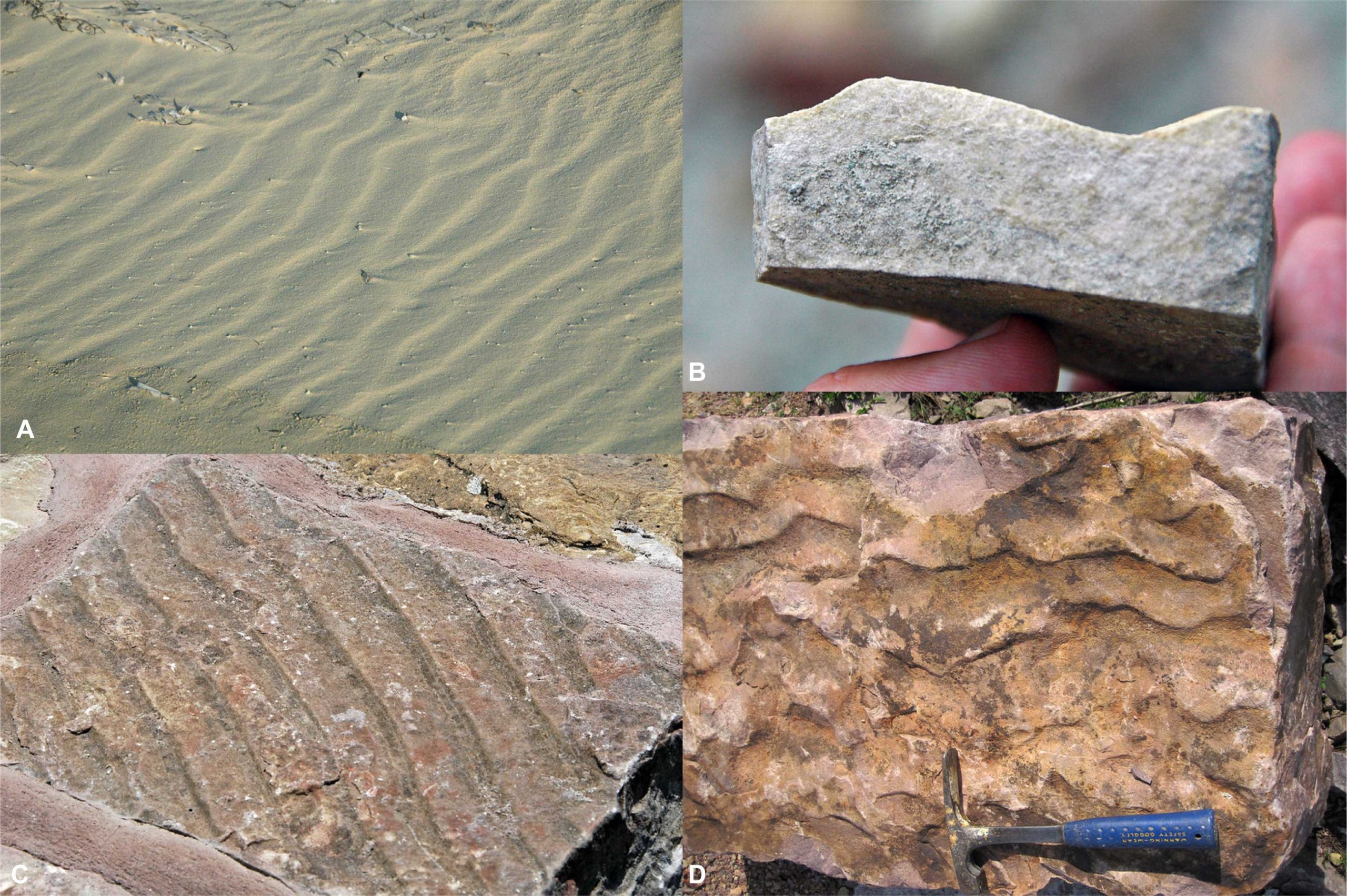 The top layer of a ripple or dune is not always preserved in the rock record, so it is rare to find ripples like those seen in Figures 4.3 and 4.7. Dunes and ripples are constantly moving, and as one passes and deposits its sediment, another follows right behind it to deposit more sediment on top. What geologists typically find in the rock record is the deposited sediment from the steep side of a series of ripples or dunes. The deposition of the steep side of several dunes or ripples creates a sedimentary structure called cross-bedding (Figure 5). One of the most important pieces of information that cross-bedding and asymmetrical ripples/dunes give geologists is the direction the wind or water was moving. The steep side of a ripple always angles downward toward the direction the water or wind was moving. Similarly, in cross-bedding, the preserved steep side of the dune/ripple angles downward in the direction the wind or water was moving, as shown by the blue lines in Figure 5b. There are many different types of cross-bedding and each form in a similar way. The differences between them are from the size and shape of the dune that is moving.

Sedimentary structures are not limited to Earth as similar features have been found on Mars, Venus as well as Titan, Saturn’s largest moon. Figure 4.8 is small-scale cross-bedding from Mars. The cross-bedding is very similar to the wind-blown sand outcrops commonly found in the U.S. Southwest (see Figure 4.7).  Do you think the scale is similar between these two images? The size of the cross-bedding can help you determine if these formed in water or air (aeolian). Smaller ripples form in water and larger ones in terrestrial dunes.

Graded bedding is a common sedimentary structure where a change in grain size can be observed within a single sedimentary bed (Figure 4.9). At the bottom of the bed are mainly coarse particles which get progressively smaller as you move vertically up the bed. Graded beds generally represent depositional environments in which transport energy decreases over time, like the changing water velocity in a river. But these beds can also form during rapid depositional events, most commonly from turbidity currents. Turbidity currents are essentially underwater avalanches of sediment that move downslope, usually starting at the edge of the continental shelf and flowing down the continental slope. The sediment deposited from a turbidity current is called a turbidite, which often has graded bedding with the coarsest particles at the bottom of the bed and the smallest at the top.

Mudcracks, also called desiccation cracks, form when wet sediment, typically clay-rich, dries out (Figure 4.10). Clay minerals expand when they get wet, and shrink when they dry out. As the sediment shrinks cracks can develop, which form polygons on the surface of the mud. Today, you can find plenty of modern mudcracks along the margins of rivers or in desert valleys that periodically get inundated with floods. After a mudcrack forms it can be filled in with new sediment.

Mudcracks are typically wider at the top of the crack and get progressively smaller as you move deeper until you reach the bottom of the crack. Because of this, mudcracks can be a good way-up indicator if you are able to see a cross-section view of the crack.

Mars also has mudcracks (Figure 4.11); one of the pieces of evidence that indicates the red planet used to have liquid water on its surface. These were found in Gale crater in an exposure of Murray Formation mudstone on lower Mount Sharp. The white material in the cracks maybe a form of calcium sulfate, either anhydrite or gypsum. This is a guess since Curiosity rover cannot test the mineral hardness.

Raindrop impressions are small imprints made by rain when it falls on soft sediment (Figure 4.12). These structures tend to be found in fine-grained rocks like siltstones and shale and not in coarser-grained sandstones. The impressions likely represent the end of a rainstorm as rain is letting up because any previously formed impressions would be destroyed by subsequent rainfall. That’s why most raindrop impressions are very scattered rather than occurring all over the surface. Then the impressions need to be filled in with sediment, before the next rainstorm, in order to be preserved.

These impressions are a good way-up indicator. The impression or small crater is made from the force of the raindrop falling onto the sediment, so you know that that side of the rock is facing up. If you were to see the bottom of the impression, it would look like a raised bump.

Sole marks is a broad term that describes a number of different sedimentary structures that appear as impressions or grooves in sediment. These include flute casts, tool marks, groove casts, and load casts. Typically the cast of the marking (the raised bump) is preserved at the bottom of a sedimentary bed, hence the term “sole” mark, and the mold side (the impression) is filled with sediment. This makes sole marks good way-up indicators since the cast side is facing down.

Flute casts are common structures created by turbidity currents (Figure 4.13). The movement of these sediment avalanches underwater can scour the ocean floor, creating an elongated impression. Flute casts are usually closely spaced and can be stacked on top of one another. Not only can they tell you which way is up, but the can also tell you which way the current was flowing. The tapered end of the flute cast points in the direction of flow.

Tool marks are made when an object, such as a stick, is dragged across sediment by a current and leaves behind what looks like scratches in the soft sediment (Figure 4.14). The elongated scratches can be used as an indicator of the paleocurrent.

Groove casts are raised parallel ridges (Figure 4.15). They are spaced closely together, often appearing in sets of 2 and 3, but do not occur on top of one another like what is common in flute casts. Interpreting the paleocurrent from groove casts can be difficult because the marking is often symmetrical. Without the addition of other paleocurrent evidence, you may only be able to narrow down the paleocurrent to two directions that are 180° apart.

Within the sketch area for each structure, provide answers to the following questions:

Using the information you have learned about sedimentary structures, complete the table below.

Geologists don’t only focus on a single rock outcrop to interpret the paleoenvironment of a region, they look at many outcrops so they can see how an environment changes across a region. Figure 4.17 below is a map of an area where sedimentary rocks and structures were described by a geologist. It is broken up into 4 zones with the following descriptions of the rocks and structures:

Organisms borrow and move through sediment on the ocean floor and the bottoms of lakes and rivers; this is called bioturbation. When organisms disturb the sediment by borrowing, their borrows can be get preserved when the sediment hardens into rock. In most cases, the borrows will fill with new sediment, but the outline of the borrow is preserved. It is difficult to assign a specific organism to the creation of a single borrow. Instead, geologists look at different borrows that tend to occur together in the rock record in order to classify them, a branch of study known as ichnofacies. Each ichnofacies is named after the most common trace fossil in the facies. Determining which ichnofacies the trace fossil fits into can tell you about the environment in which the organism lived, including water depth, salinity, energy and turbidity, and what the substrate was like. Generally, vertical borrows were formed in shallow water environments and horizontal burrows in deeper water environments. Table 4.1 contains a list of ichnofacies and Figures 4.18-4.25 are images of them.

*No OER images are available to summarize each ichnofacies, so these are single examples of an ichnofossil that belongs to the ichnofacies. You can find depictions of each facies here and an extensive list of ichnofossils here.

Your instructor will provide you with some samples of ichnofacies or ichnofossils. Sketch each sample, paying special attention to the details of each ichnofossil. Identify the ichnofacies of each sample and the type of sedimentary rock. Based on those identifications, give a brief description of the environment.

The Story of Earth by Daniel Hauptvogel & Virginia Sisson is licensed under a Creative Commons Attribution-NonCommercial-ShareAlike 4.0 International License, except where otherwise noted.