Some geologists use fossils to determine stratigraphy and correlate stratigraphic sequences. Others prefer to study paleoecology to determine ancient where both plants and animals co-existed. This avenue leads to discoveries about past climate, predator-prey relationships, and even ocean depth. Using this information, artists create reconstructed paleoenvironments (Figure 8.1) to display these ancient habitats.

Remember, fossils are not just exciting curiosities but were once living organisms that reproduced, ate each other, and interacted with their environment just like we do. A fossil’s paleoecology depends on many factors of their . These include physical conditions, such as temperature, light, water depth,  and energy (calm vs. turbulent), and chemical conditions, such as salinity, pH, oxygen, and toxic chemicals. Some animals will thrive if these variables change, and others will die off. Have you ever been to the beach and seen large piles of seaweed? They came from the middle of the ocean and were brought to shore as ocean currents and winds changed. Some organisms can survive environmental change, such as oysters that can live in both salty and freshwater. Fossils hold the key to determining what the paleoenvironment was like. This ability to reconstruct a fossil’s paleoenvironment is one of the most valuable tools that a paleontologist has to offer to broader fields of geology.

Understanding every detail of how a fossil lived is not necessary to help you use fossils to interpret an ancient environment in the rock record. For example, suppose you know that a phylum is exclusively marine or exclusively terrestrial. In that case, this can easily change your interpretation of an otherwise dull sedimentary layer. This is just the beginning of using fossils to determine the paleoenvironment; if you know how it lived, you can determine where it lived.

For any fossil group, ask yourself some basic questions such as the type of the skeleton, its body plan (symmetry), its habitat, and how it fed and behaved. You might find these are hard to determine with fossils but give it a try. Table 8.1 is a list of characteristics that you can use for determining its paleoenvironment:

Where is the skeleton relative to the tissue, as this can be internal, external, or none? Also, look at the number of parts in the skeleton and its construction. This can be either a single element or multiple elements like bivalves (two-part), multivalve (range of 3 to ~15 parts), plates, or bones (many parts from 10’s to 100’s), or (very many small parts numbering up to 1,000’s).

Symmetry is similar to what you described in the last chapter but now consider how it relates to how the organism lived. Bilateral symmetry means that both and sensory organs can be placed efficiently. In contrast, organisms with radial symmetry tend to be slow or immobile (sessile). They also respond to stimuli from all directions. Organisms with spherical symmetry will live in open water. Finally, those with no symmetry are typically immobile (sessile).

Most of the fossils you have studied are marine, but remember there are many other environments in the terrestrial, transitional, and marine realms (Table 8.2). Within these environments, organisms can have different modes of life, including not moving (sessile), attached by cement to the bottom, or unattached and able to move (motile) (Table 8.3). Some also categorize organisms as benthic and planktonic. Benthic organisms live at the bottom of the ocean on or in the sediment, and planktonic organisms float or swim.

The way an organism feeds is important for determining its role in the paleoenvironment (Table 8.3). Does it eat by suspension-feeding as it collects small particles from the water column? Or perhaps it eats by deposit-feeding and ingesting sediment to get nutrients. Is it an herbivore that only eats plant material, a carnivore that captures and kills its prey, an omnivore that eats both plants and animals, or a scavenger that only eats dead material? One fascinating debate among paleontologists is whether Tyrannosaurus rex was a carnivore or scavenger. Ask yourself: if it was a carnivore, how could it catch its prey with such tiny forearms? Whereas if it was a scavenger, having small arms might be an advantage for just using its large teeth to tear apart the dead meat. The final question is to determine if the organism lived a solitary life or in a colony with others of its own kind. If you can answer some or all of these questions from your observations, you’ll be able to address more fascinating aspects of ancient life.

Depending on the continental paleoenvironment, these can be just as fossiliferous as marine environments. For example, swamps and lagoons can have a wide variety of fish, plant, and insect fossils. In continental paleoenvironments, you commonly do not find as these are not as widespread. Think how quickly the environment can change during a drive through the countryside. Instead these paleoenvironments can record biodiversity and can be used for paleobehavioral analysis. Often these are the fossils more commonly known to the general public as they catch our imagination. What child doesn’t know the name of common dinosaurs or ice age mammals?

First, review these summaries of the characteristics of Bryozoans and Echinoidea that can be used to determine their paleoenvironments:

Using these descriptions as a guide along with your observations, Table 8.1, and material from Chapter 7, characterize a coral (Rugosa) and brachiopod.

Head to the PaleoDB Navigator. A large map of the world should open with many colored circles. The circles represent locations where fossils have been discovered, and the color of the circle corresponds to the geologic timescale at the bottom of the page. You can click through the different time periods to see where fossils of that age have been discovered. On the right side, there is a list of the most abundant fossil groups based on the time period you have selected on your map view. For example, you could zoom in on fossils found in South America from the Ordovician Period. The menu on the right will update with what fossils are found on your map for that period. Depending on your zoom level, you may see that the Trilobita Class is the most abundant, or you may see it broken down into several orders of Trilobita with the Asaphida Order as the most abundant. If there is lower diversity of fossils in your map view and time period, you will see the classification broken down to lower levels. You may find you need to Google some of the names to figure out what phylum, class, or order they belong to. You can clear whatever filters you select on the lower left side of the page.

8.4 Fossils and Paleoenvironments in Movies

We all know that Hollywood stretches the truth (or outright makes it up) when depicting science in movies. Perhaps the most famous movie depicting fossils and paleoenvironments is the Jurassic Park series. For example, in the original movie from 1993, there is a scene where a Tyrannosaurus rex chases a Jeep at over 60 mph. At the time of production, some paleontologists thought T. rex could only run at a maximum speed of about 45 mph. However, we now know that T. rex didn’t have the hip structure to support running and was more of a brisk walker. So, you could probably outrun a T. rex.

Using the PaleobioDB Navigator, look up “Dinosauria” (an unranked ). A clade is a group of organisms that share a common ancestor, and cladistics is a way to classify organisms based on common characteristics. You’ll notice that one of the groups in the Dinosauria clad is Aves, which is the class comprising birds. Yes, according to cladistics and taxonomic rankings, dinosaurs and birds are related.

Exercise 8.1 was inspired by an exercise on Life Mode Characteristics by Steven J. Hageman at Appalachian State University 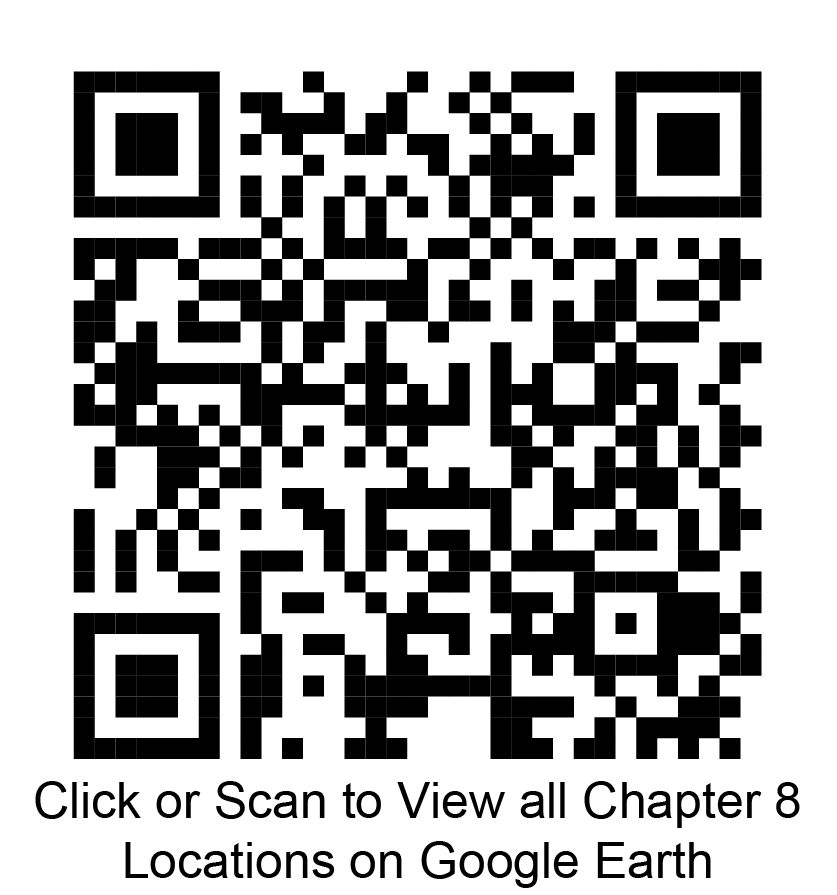 the natural home or environment of a plant or animal

an environment that prevailed at some time in the geologic past

having the power of locomotion

a fossil used for both dating and correlating of strata in which it is found. These are typically organisms that lived for a short geologic time period