Everyone has heard the word fossil! So, how do you define this term? In this lab, we will define it to mean any evidence for the existence of prehistoric life. What is difficult to explain in this definition is what is meant by prehistoric. For example, would you consider bodies preserved at Pompeii to be fossils, or how about the remains of a frozen mastodon from the Pleistocene that was preserved well enough to be eaten? Some say anything older than 11,000 years is a fossil, but this part of our definition is a matter of semantics. An excellent place to learn more about fossils and fossilization is the Digital Atlas of Ancient Life.

We start this chapter on how organisms become fossilized with a quick exercise. Figure 6.1 contains three different organisms.

Taphonomy is the branch of paleontology that focuses on the fossilization process. Fossils are preserved by three main methods: unaltered soft or hard parts, altered hard parts, and trace fossils. You already learned about trace fossils in Chapter 4.

Unaltered fossils are rare except as captured in amber, trapped in tar, dried out, or frozen as a preserved wooly mammoth. Amber is the fossilized tree resin that can trap flowers, worms, insects, and small amphibians and mammals. The father of one of the authors was part of a gold mining operation that discovered a wooly mammoth calf (nicknamed Effie) in Alaska. This was the first mummified mammoth remains found in North America. Even though it was buried about 21,300 years ago, it still consists of tissue and hair. Sometimes, only organic residue is left behind and is detected by molecular, biochemical techniques. Earth’s oldest fossils are only preserved as complex organic molecules.

Soft tissue is hard to preserve because it needs to be buried before bacterial decay can occur. This preservation occurs when remains are buried rapidly in an oxygen-free, low-energy sedimentary environment. Since these conditions are uncommon, the preservation of soft tissue rarely happens. Instead, typical examples of unaltered fossils are skeletal material that has been preserved with little or no change. Many marine invertebrate fossils and microfossils were preserved in this manner. However, paleontologists are now looking closer at fossils and recognizing thin carbon layers in the rock around fossils as soft tissue. Recently, a team led by Mark Norell, a paleontologist at the American Museum of Natural History in New York City, identified a layer of carbon around dinosaur embryos formed over 200 million years ago that they think was a soft eggshell!

Unaltered fossils contain minerals that were biologically produced; these include apatite (in bones and teeth and rarely in exoskeletons, hardness = 5), calcite (calcium carbonate found in many organisms such as shells, hardness = 3, fizzes in acid), aragonite (similar to calcite, but an unstable polymorph) and opal (a type of silica found in marine animals and plants, hardness = 7). In addition, the hard parts (exoskeleton) of some insects and arthropods are made of chitin, a polysaccharide related to cellulose. If you can identify the minerals present in a fossil, you can distinguish if it is original material or altered.

Alteration of hard parts is much more common in fossils and happens when original skeletal material is either permineralized, recrystallized, replaced, carbonized, or dissolved (Table 6.1).

Trace fossils, which we discussed in Chapter 4, are not really fossils but the evidence that organisms affected the sediment by burrowing, walking, or even leaving behind excrement or vomit. No kidding, there is fossil poop; this kind of trace fossil is called a “coprolite,” from the Greek word kopros, meaning dung. One last rare type of trace fossil is gastroliths, extremely smooth polished stones that aided digestion in dinosaurs and crocodilia. These are more highly polished than stream-worn gravels. Gastroliths found in Jurassic sediments in Wyoming may have been carried by sauropods over 1600 kilometers from their source in Wisconsin.

This model shows a preserved fossil shell on the right (not a cast, original) and an external mold on the left of the ammonoid cephalopod Gunnarites sp. from the Cretaceous Lopez de Bertodano Formation of Snow Hill Island, Antarctica. The fossil specimen is from the collections of the Paleontological Research Institution, Ithaca, New York. The diameter of the specimen (not including surrounding rock) is approximately 9 cm.

This is an example of an internal (1) and external (2) mold of the gastropod Cassidaria mirabilis from the Cretaceous of Snow Hill Island, Antarctica. The specimen is from the collections of the Paleontological Research Institution, Ithaca, New York. It is approximately 6 cm in length (not including surrounding rock).

More 3-D models on fossil preservation can be found at the Digital Atlas of Ancient Life.

If you ever get asked by a friend to help identify a fossil, watch out for pseudofossils, which are accidents of diagenesis that look like a fossil but are just weird sedimentary formations. Pseudofossils include septarian nodules that are mistaken for reptile skin or turtle shells, concretions are mistaken for eggs, and manganese oxide dendrites mistaken for ferns moss.

Some fossils are incredibly fragile. Some delicate samples are prepared by air abrasion with talcum powder to remove the matrix. For some trilobite specimens, this takes thousands of hours to expose their delicate features. Some fossils you will use may be easy to replace and others impossible. Others may be part of a faculty member’s personal collection. Only handle the specimens that your instructor says you can. If you are taking this lab when teaching is face-to-face in a lab setting, you will handle both real and replica specimens of fossils. While these may have been around for millions or billions of years and seem like they are now rocks, they need to be treated with respect. Some of the fossils that you may handle may be the only specimen of their kind in the collection. Some of the larger specimens may be heavy, especially those that are molds filled with sediment. Never try to scratch the specimens for hardness. Also, never use acid as a mineral test. Finally, if you break or steal a specimen, you will be charged for its replacement.

You are free to make sketches or photograph the specimens. If you do this, you may want to put a scale in the image, such as a coin or ruler. This will help you remember the size of the object. Some specimens will have labels or numbers written on them, and others will not because they may be too fragile to even be written on. You must put each specimen back in its appropriate box or location in a lab tray. Also, do not move any of the paper labels from the boxes. This will prevent confusion for other lab students.

If you’ve wondered how to start your own fossil collection, you can either find them on your own or buy them. The price of fossils for sale ranges from cheap to outrageously expensive. For example, in 2020, an anonymous collector bought a fossil Tyrannosaurus rex, nicknamed Stan, for $31.85 million. This specimen only had 188 bones and was one of the most complete of its species. If this is beyond your budget, you can find inexpensive fossils such as fossilized snails from Morocco for only $0.30 each.

Inspect the first set of samples and fill out the table with information about the presence of original biologic material, positive and negative relief, and mineral composition of the samples. Identify the mode of preservation of the fossils. Use the flowchart in Figure 6.10 to help.

*Note that you may not see relief or be able to identify the mineral. Leave these blank if necessary.

Critical Thinking: Why is replacement the most common mode of preservation?

The way an organism can become fossilized depends on many things. Below are some examples to think about.

During the time, 299 to 252 million years ago, an extensive reef system grew in west Texas at the edge of a small inland marine basin that extended over 26,000 km² (10,000 square miles). Now it is called the Delaware basin, home to a major oil field (Figure 6.11). This reef is now exposed in three mountain ranges; Apache, Guadalupe, and Glass Mountains. Elsewhere, the reef is now buried around the entire rim of the basin. The northernmost exposure of the reef is part of the Guadalupe Mountains National Park. It is home to Carlsbad Caverns, which has the largest underground chamber in the United States. The reef was home to many fossils, including ammonoids, bryozoans, algae, sponges, brachiopods, gastropods, pelecypods, echinoids, fusulinids, trilobites, corals, and crinoids.

Unlike modern coral reefs, such as the Great Barrier reef of Australia or the reefs off the coast of Florida and Belize, it was constructed from s, algae, and lacy animals called . One magnificent exposure of this reef is El Capitan in the Guadalupe Mountains National Park. The reef is subdivided into three parts: back reef, reef, and fore reef. Each had its own unique ecosystem as well as lithology and preservation. The deep part of this basin reached depths of almost 800 meters (½ mile) and is where a lot of organic matter was deposited, leaving black shales – the source of petroleum.

The Delaware inland sea had a narrow outlet to the ocean, much like the Black Sea today. However, after ~30 million years, the entrance got restricted, and the basin started to dry up, forming extensive deposits (Castille and Salado Formations). This created supersaturated, acidic brines that started to dissolve the underlying carbonate reef, forming extensive caves and karst that you can now visit at Carlsbad Caverns National Park and Lechuguilla Cave, the 8th longest explored cave in the world at ~220 km or 138 miles long. These brines also dissolved the silica-rich sponges that formed the reef and affected the fossil preservation in parts of this Permian reef system.

Google Street View in Google Maps has recorded many of the trails in Guadalupe Mountains National Park. Start at either McKittrick Canyon or the trail to Guadalupe Peak and drag the orange person icon onto one of the trails to see views of the massive limestone reef.

The stratigraphy of this basin is complicated because it varies with time and position in the reef. According to recent sequence stratigraphic analysis, there were up to six transgressive-regressive sequences in this basin (Kerans and Kempter, 2002). Figure 6.13 gives a simplified stratigraphy for the basin during the Permian.

Fossils in the Capitan Formation of the Glass Mountains are uniquely preserved (see Figure 6.4). Paleontologists found that it is easy to dissolve away the host carbonate in weak acid and leave behind spectacular specimens.

Kerans, C., and Kempter, K., 2002, Hierarchical stratigraphic analysis of a carbonate platform, Permian of the Guadalupe Mountains: The University of Texas at Austin, Bureau of Economic Geology (American Association of Petroleum Geologists/Datapages Discovery Series No. 5), CD-ROM. 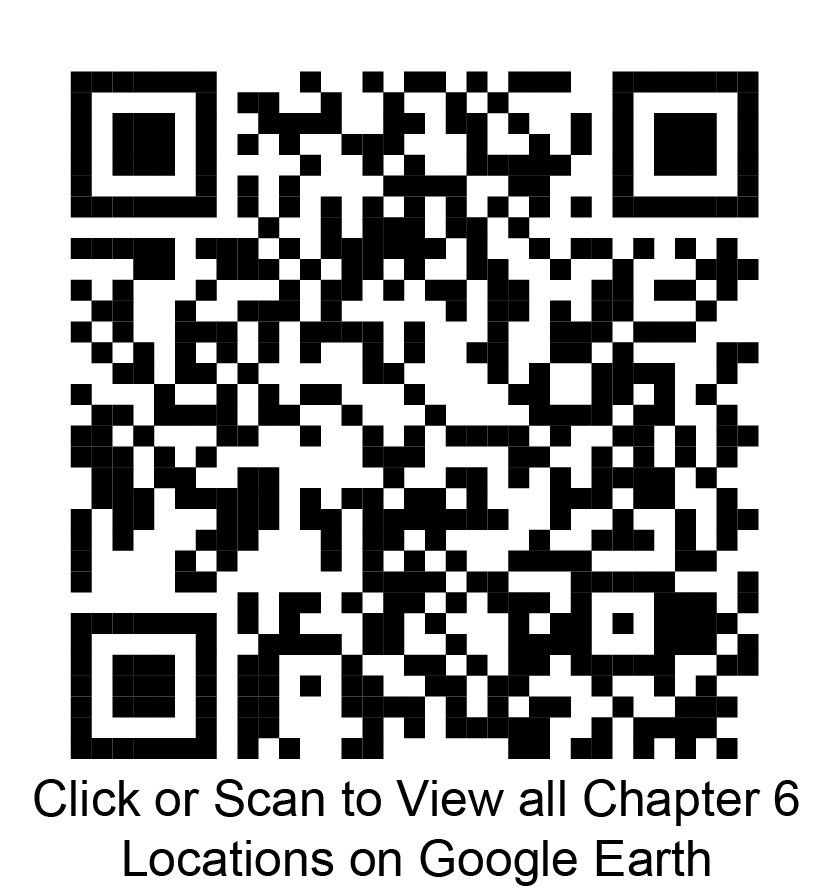 an animal lacking a backbone such as a clam or worm

an animal with a backbone such a dog or cat

a geologic period that spans 47 million years at the end of the Paleozoic era, from the end of the Carboniferous period (298.9 Ma) to the beginning of the Mesozoic era with Triassic period (251.902 Ma)

multicellular organisms with bodies full of pores allowing water to circulate through them. They are made of collagen and some have silica-rich spicules.

a type of aquatic invertebrate animals. They are filter feeders that extract food particles out of the water using tentacles.

a super ocean that surrounded all of the supercontinent Pangea