Some of the maps in this chapter can be printed on poster paper from large PDF files found here (opens in a new tab).

Throughout this lab manual, you’ve been looking at geologic maps for many purposes, such as locating different types of rocks, finding plate boundaries, investigating stratigraphic relationships, and more. However, there are few things you have yet to do. One important skill is using geologic maps to find fossils. This involves using your knowledge of the environment fossil used to live such as deep marine, swamp, or deserts, and the age of the stratigraphic unit. You will need to use your knowledge gained from Chapters 5 to 8.

You may also identify provinces on other planets, such as Mars, which has three geologic provinces; 1) Tharsis, which is volcanic, 2) northern highlands which have a smooth topography, and 3) southern highlands, which are rugged and heavily cratered (see Golombek and Phillips, 2010).  If you were going to go put a settlement on Mars, which of these would you pick to settle just knowing this information?

When scouring an area for fossils, the easiest to find are those exposed by weathering from wind or water. In 2020, a California state park ranger was checking out a watershed near the Mokelumne River.  He spied a fossilized tree. Then he came back and found that erosion over the year exposed a whole petrified forest and fossilized bones from Miocene mammalian megafauna such as ancestors of horses and rhinos, gomphotheres (similar to elephants but with twice as many tusks), giraffe-sized camels, and many other creatures. Now a team of paleontologists and geologists is excavating the site. You may ask why so many fossils are in one place and why they eroded away so quickly. Well, they were either buried in a mudslide or volcanic ash such as a lahar. Both of these are easy to erode rapidly and expose all the bones of the trapped creatures. So, keep on looking, and perhaps you’ll find some of your own fossils.

Once you have found a fossil, what comes next? There are many resources available for amateur fossil collectors. After your initial discovery, if you think you might have an interesting find, you can contact other paleontologists for help or use web resources. If this is a new discovery or unusual specimen, paleontologists will excavate the fossils by removing any overburden and bring them to a museum or other collection. Small fossils such as mammalian teeth are sometimes collected by dry sieving sands.

Many think this is glamorous work similar to what is seen in movies such as Indiana Jones or Jurassic Park. In reality, it often involves tedious work sitting in a dry, hot, dusty quarry removing overburden for many days, especially to expose large fossils. Or you may have to dig a trench around a large specimen to successfully get all of the fossil (Figure 10.1). These large fossils need to be encased in a plaster jacket before bringing them back to the lab. In contrast, delicate fossils are often wrapped in toilet paper to protect them. Plus, Indiana Jones’s job performance would not have been viewed favorably by his university.

Fossil collecting must be done with proper permission and possibly permits, especially if you are looking for fossils on public lands in the United States and Canada. It is important to know the local laws. For example, you can’t collect anything in a National Park. In a National Forest or Bureau of Land Management land, it is illegal to collect fossil bones but okay to take up to 25 pounds of fossilized wood per day, up to 250 pounds per year. So, before you start your own collection, be sure you have proper permission from either the landowner or the proper authorities to collect fossils.

Now that you are using fossils for more than just curiosity, you need to think about how to best preserve them and their future usefulness for others. Many amateur fossil collectors only record the fossil name and the formation. What kind of information do you think is needed?

Now that you have all of the basics for fossil collecting, it’s time to go on a search. Fossils in museums are identified by location data and geologic age. Below is a map of all the fossil localities known in the United States from PaleoDB.

If you search online for the best places in the world to go look at fossils or collect them, the number one locality is the Burgess Shale (Exercise 9.4) to see the first soft-bodied animals (but you can’t collect here as it is a protected site). If you want to be in the United States, go to Calvert Cliffs in Maryland to collect shark teeth and more. However, if you want to combine a trip to Europe with this search, go to either the UNESCO World Heritage Site in the Jurassic Coast of the United Kingdom (Exercise 5.3) to collect ammonites or take a trip off the beaten track to Stevns Klint in Denmark. We’ll explore what fossils can be found here as well as their geologic history.

To start your exploration of Stevns Klint, first look at the geologic map (Figure 10.3) and then the stratigraphic column (Figure 10.4). To the east and north is Sweden, a part of the Precambrian Fennoscandian Shield made of Archean and Proterozoic gneisses and greenstones. The latest geologic event in southern Sweden was the Sveconorwegian orogen active between 1140 and 960 Ma; too old an area to have any fossils. North-south rifting associated with the break-up of Pangea in the Triassic created the Danish Basin, an extension of the Oslo Graben in Norway. After rifting, marine incursion can be seen as a section of carbonates. A marine setting can host many animals and might be a good place to collect fossils. During the Upper Cretaceous, deep marine carbonates composed of (algae) settled in the rift basin as a carbonate ooze and are now lithified as . As the basin filled in, carbonates were deposited in bryozoan mounds in shallow water. Today, sea cliffs at Stevns Klint expose chalk at the base, then a clay layer rich in , and finally a bryozoan limestone with chert nodules. This boundary between the Cretaceous and Danian (Paleogene) was initially described in 1847 by Desor.

Have you ever looked at a geologic map of North America? You may not remember it, but part of the map you saw during the first week of lab was North America (Figure 0.9). The age and character of the rocks give rise to landscape characteristics (physiographic) and the types of soil and sediments that cover the surface. The modern landscape of the United States has been shaped by tectonic, climatic, sedimentary, and erosional processes.

People tend to be either “lumpers” or “splitters”. The “lumpers” like to group things together and join areas with similar characteristics. On the other hand, “splitters” like to subdivide characteristics into smaller and smaller groups. This is why you might find more or fewer physiographic provinces on maps from different geologists.

Another way to look at geologic provinces is to see the general distribution of rock types. Figure 10.8 shows how igneous (volcanic and plutonic), sedimentary, and metamorphic rocks are located throughout North America. Many sediments and sedimentary rocks are exposed at the surface. These materials typically cover the surface and overly older rocks. Sedimentary rocks exposed throughout North America are of all geologic ages and were often deposited in paleoenvironments different from what exists in the region today.

One major issue for society is potential sources of energy. Traditionally this has been coal and petroleum, as well as hydroelectric. Now, there is a push for alternative sources. Have you ever considered just using the temperature of the Earth as an energy source? This can be done using a heat pump to warm or cool a house. Since Vikings first landed in Iceland, they used geothermal energy for bathing, baking bread, and washing clothes. Now, nine out of ten homes in Iceland are powered by geothermal energy. In the United States, the Basin and Range province has great potential for geothermal energy (NREL).

The geology of northern New Jersey contains a record of the Appalachian Orogenies, including the assembly of Pangea and its subsequent breakup. You can print the geologic map (opens in a new tab) and cross-sections (opens in a new tab) on poster paper. Both maps contain descriptions of the bedrock lithology. The bedrock is either exposed at the surface or sits beneath loose, unconsolidated sediment. Alternatively, you can access digital versions of both maps from the USGS. Use the red arrows in the Map Preview to cycle between each map. The files available for download are on the right-hand side.

The Valley and Ridge Province formed as a result of deposition and slight deformation of sediments associated with the Taconic and Acadian Orogenies.

The New Jersey Highlands lie between the Valley and Ridge Province and the Newark Basin.

Many of the rocks in this region have an age that corresponds to the Grenville Orogeny and the assembly of the supercontinent called Rodinia. This orogeny is seen on many of the world’s continents, including North America, South America, Antarctica, Europe, and Africa, but because this event happened so long ago, much of the evidence has been altered or destroyed by tectonic processes.

You may have noticed there is no evidence of the Alleghenian Orogeny, which was the assembly of the Pangaea about 250 Ma. Any rocks from this orogeny have all been eroded in New Jersey, but much of the faulting and folding of rocks throughout the Valley and Ridge Province and the Highlands occurred during the Alleghenian Orogeny.

The Newark Basin (Figure 10.12), which is part of the Piedmont Province of the eastern U.S. that extends from New York to Alabama, formed during the breakup of Pangaea during the Jurassic, which eventually led to the opening of the Atlantic Ocean.

Some background info from https://whc.unesco.org/uploads/nominations/1416.pdf 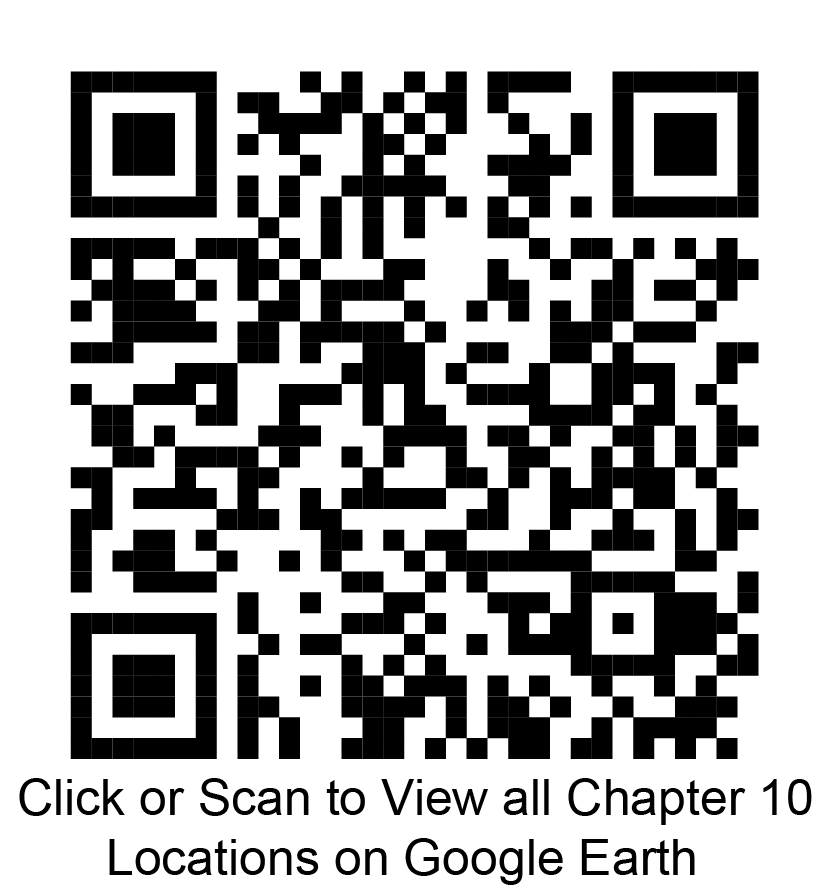 also called coccoliths are unicellular marine algae; they belong to the kingdom Protista. They have calcite scales that can form chalk.

a chemical element with the symbol Ir and atomic number 77. Iridium concentrations in meteorites is much higher than any terrestrial rock. Thus, high concentrations of iridium are hypothesized to come from extraterrestrial sources.