In this chapter, we will look at how the world around us has changed very dramatically in the last two decades.

In the year 2000, General Electric, Cisco Systems, Exxon Mobil, Pfizer, Microsoft, Wal-Mart, and Citigroup were among the highest valued public corporations by market capitalization on the planet. Oil and gas, retail, networking hardware, healthcare, computers, and banking were represented in this group with market caps in the 250-480 Billion US Dollar range.

While Microsoft has been a staple in the top 10 market cap group over the past two decades, it had its ups and downs. Transitioning from hardware and software to cloud services, reinventing tablets with the Surface line that features a full operating system to its users, and diversifying its services altogether allowed for Microsoft to be a mainstay. Office 365, Power BI, Azure, LinkedIn, Skype, PC and Xbox Gaming among many others are what help this company remains competitive.

The first iPod was released almost twenty years ago. Back then, Apple was widely considered a tech industry has-been. By spring 2010, Apple had grown to be the most valuable tech firm in the United States, selling more music and generating more profits from mobile device sales than any firm in the world. In the summer of 2020, Apple was the highest valued company on the planet followed by Microsoft, Google/Alphabet, Amazon, and Facebook. In recent years, Microsoft and Apple have battled for the top spot with Saudi Aramco disrupting the top five since it went public in 2020.

Google barely existed twenty years ago and well-known strategists dismissed Internet advertising models (Porter, 2001). By 2010, Google brought in more advertising revenue than any firm, online or off, and had risen to become the most profitable media company on the planet. Today, billions in advertising dollars flee old media and are pouring into digital efforts. This has also reshaped industries and redefined skills needed to reach today’s consumers. Their Android operating system, devices, and other business ventures lead to Alphabet becoming the giant it is today.

In the year 2000, social media barely warranted a mention. Today, Facebook’s user base is larger than any nation on the planet. Speaking of globalization, China started the new millennium largely as a nation unplugged and offline. But today, China has more Internet users than any other country and has spectacularly launched several publicly traded Internet firms including Baidu, Tencent, and Ali Baba. While the landscape has changed since, by 2009, China Mobile was more valuable than any firm in the United States at the time except for Exxon Mobil and Wal-Mart.

Amazon has grown from a garage startup into the online e-commerce giant by transforming online shopping.  Amazon has changed how we read by making e-readers mainstream with their Kindle devices, changed how we interact with the internet and shopping through Alexa smart speakers, increased their reach through Prime services,  one-click purchases, and cloud computing.

Yet none [of The Big Five] hold a candle to Netflix when it comes to revenue per employee. 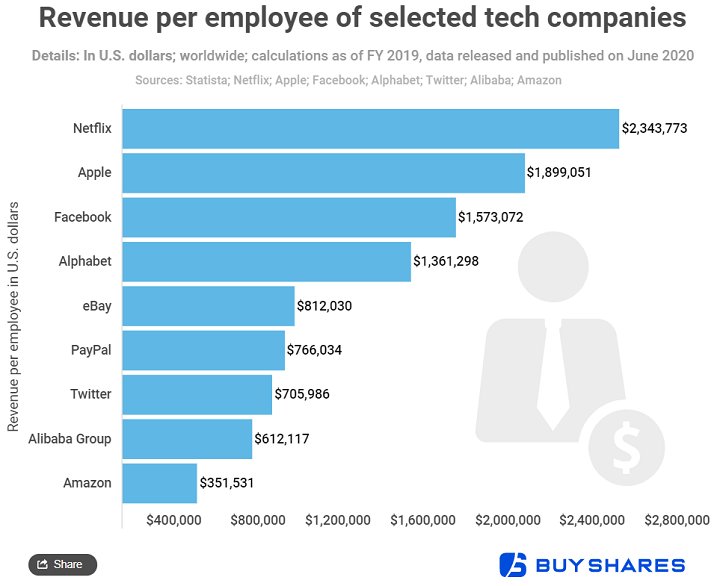 All firms are harnessing social media for new product ideas and for millions in sales. But with promise comes peril. Mobile phones and cameras are just a short hop from YouTube, Facebook, Twitter, Snapchat, or TikTok. This also means that every ethical lapse can be captured, every customer service flaw tagged on your permanent record that is the Internet. Ultimately, the service and ethics bar for today’s manager has never been higher.

Cloud computing and software as a service are turning sophisticated, high-powered computing into a utility available to even the smallest businesses and nonprofits. Data analytics and business intelligence are driving discovery and innovation, redefining modern marketing, and creating a shifting knife-edge of privacy concerns that can shred corporate reputations if mishandled.

As the last twenty years have shown, tech creates both treasure and tumult. These disruptions aren’t going away and will continue to accelerate, impacting organizations, careers, and job functions throughout your lifetime.

For all of these reasons and more, we must place technology at the center of business and managerial playbooks.

Builds on 1.1 Tech’s Tectonic Shift: Radically Changing Business Landscapes by University of Minnesota is licensed under a Creative Commons Attribution-NonCommercial-ShareAlike 4.0 International License, except where otherwise noted. Updated and edited by Emese Felvégi in August, 2020/January 2021.